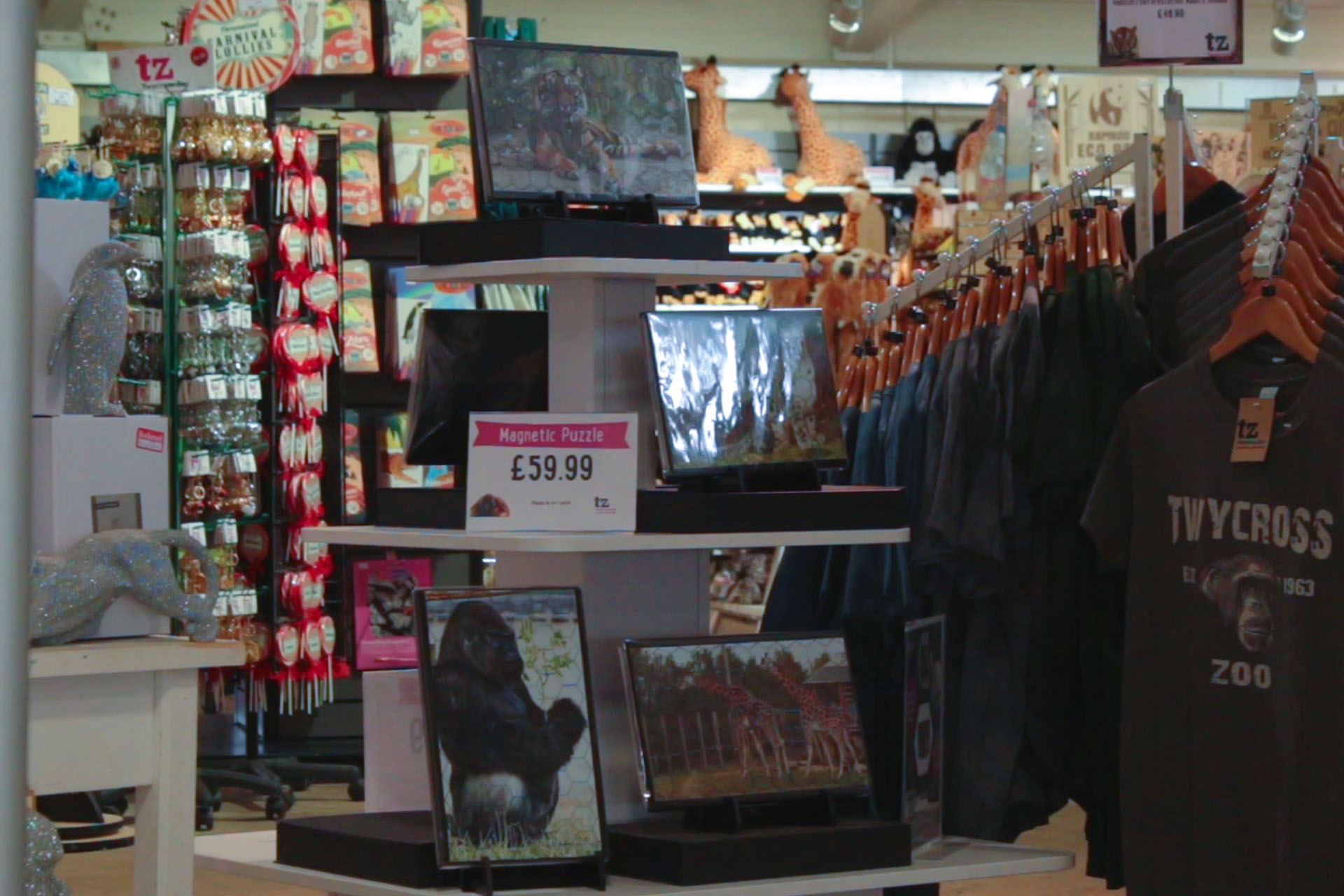 A day at the zoo – HEXA-PLEX Puzzles at Twycross Zoo

By bentompkinsFebruary 3, 2022News
No Comments

Its always a good day when you get to visit the zoo but when we embarked on the journey to capture the animals that are featured on the HEXA-PLEX puzzle range it was even more exciting. 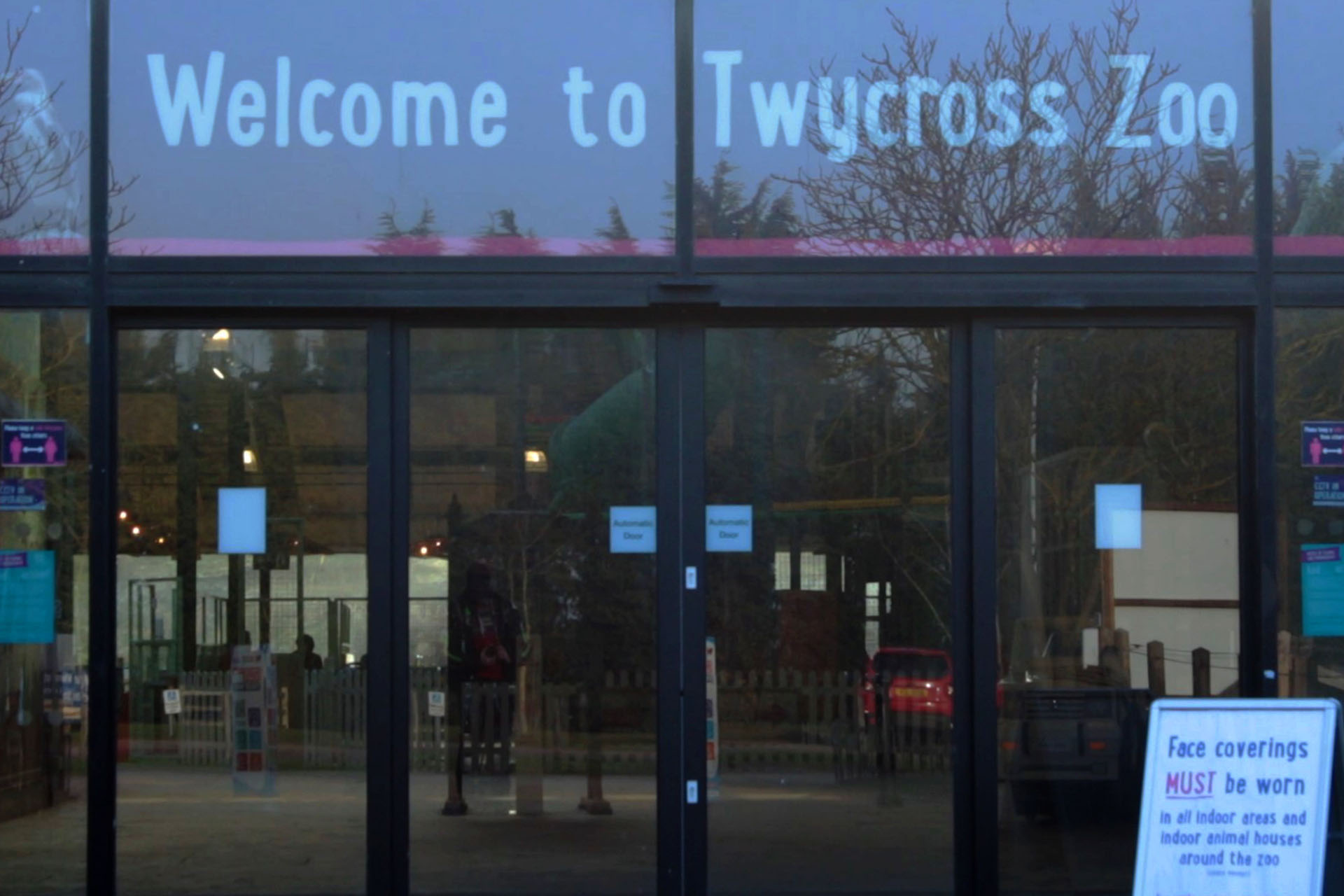 We arrived at Twycross early on a very cold foggy morning, but this did not deter us from capturing the images that would feature in our product categories.

You enter the zoo and walk through the Himalaya centre where we grabbed a coffee and were lucky enough to see Urma the snow leopard having her breakfast.

Urma is mostly a shy animal which is a trademark of her species, preferring to hide away between the rocks and plants within her habitat.

Snow Leopards are notoriously hard animals to track and study in the wild due to their secretive, solitary lives. It is also dificult to find them as they mostly live over 6000 feet above sea level!

However, just like her cousin Jahly the tiger, she does still like to show herself off in front of visitors! In fact, snow leopards are closer in relation to tigers than to true leopards.

Urma likes the colder months and her thick fur coat is suited to such conditions. Urma likes to use her long tail like a blanket for warmth.

Making our way into the park we were welcomed by the wonderful noises of the various monkey species enjoying the sun breaking through the clouds. Our next stop was visiting Jahly the Sumatran tiger who was nestled on her heated rock. 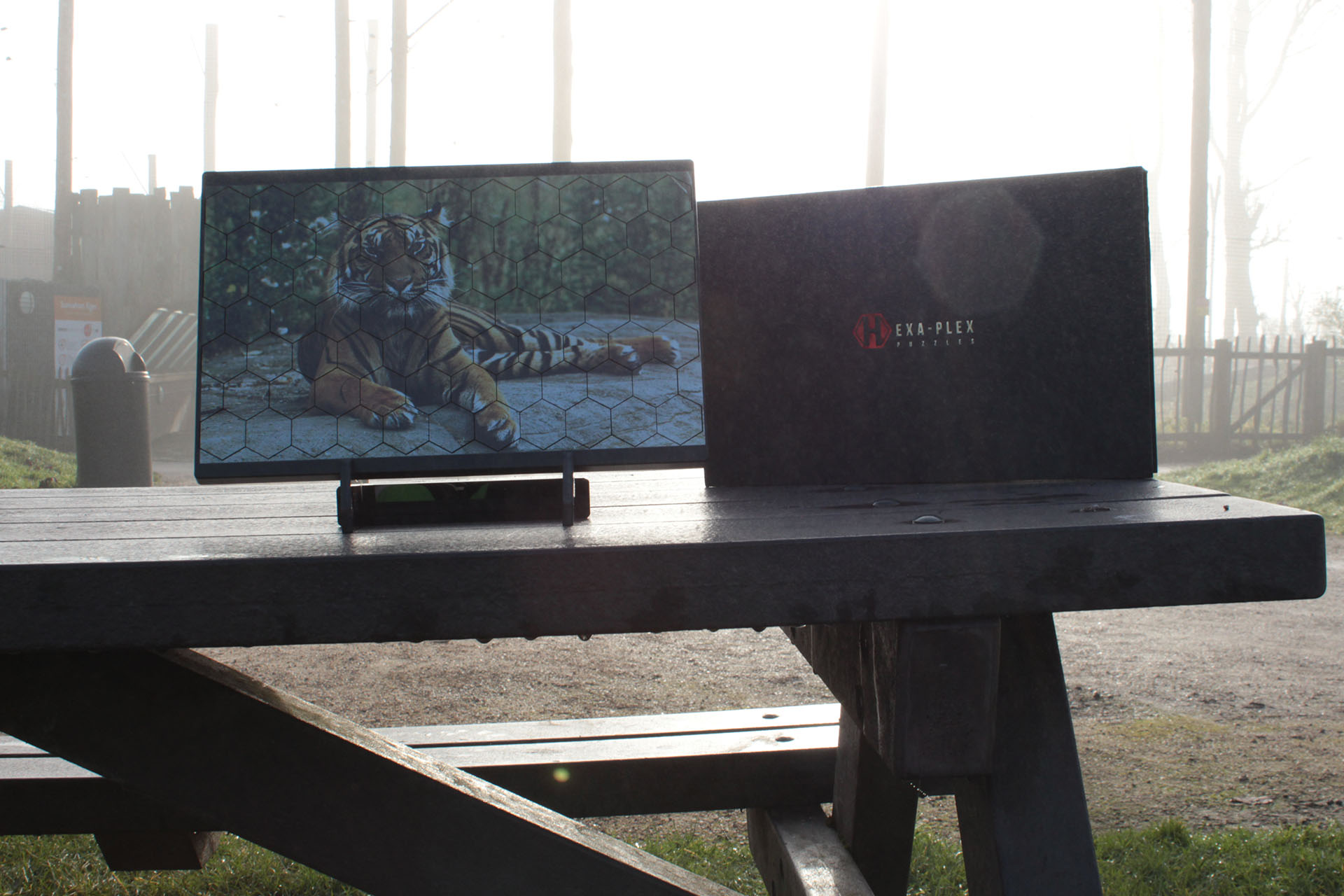 Jahly is a Sumatran Tiger

Sumatran Tigers are the smallest of all living tiger species. Only found in Sumatra.

Jahly is clearly the more confident of the two at Twycross zoo- and the one you’ve probably seen.

Often seen on her heated rock or on lookout on top of the glass viewing tunnel Jahly spends over 12 hours a day sleeping.

Curious, reasonably energetic Jahly loves stalking Sialang and chasing careless pigeons. She may look orange to us but she actually looks green or grey to her favourite prey deer which helps her get close enough when hunting.

Moving on we navigated the different zones the zoo has which feature a wide range of animals from around the world until we arrived at Oumbi the gorilla’s enclosure.

Oumbi is a Silverback and its easy to see why he gets that title. 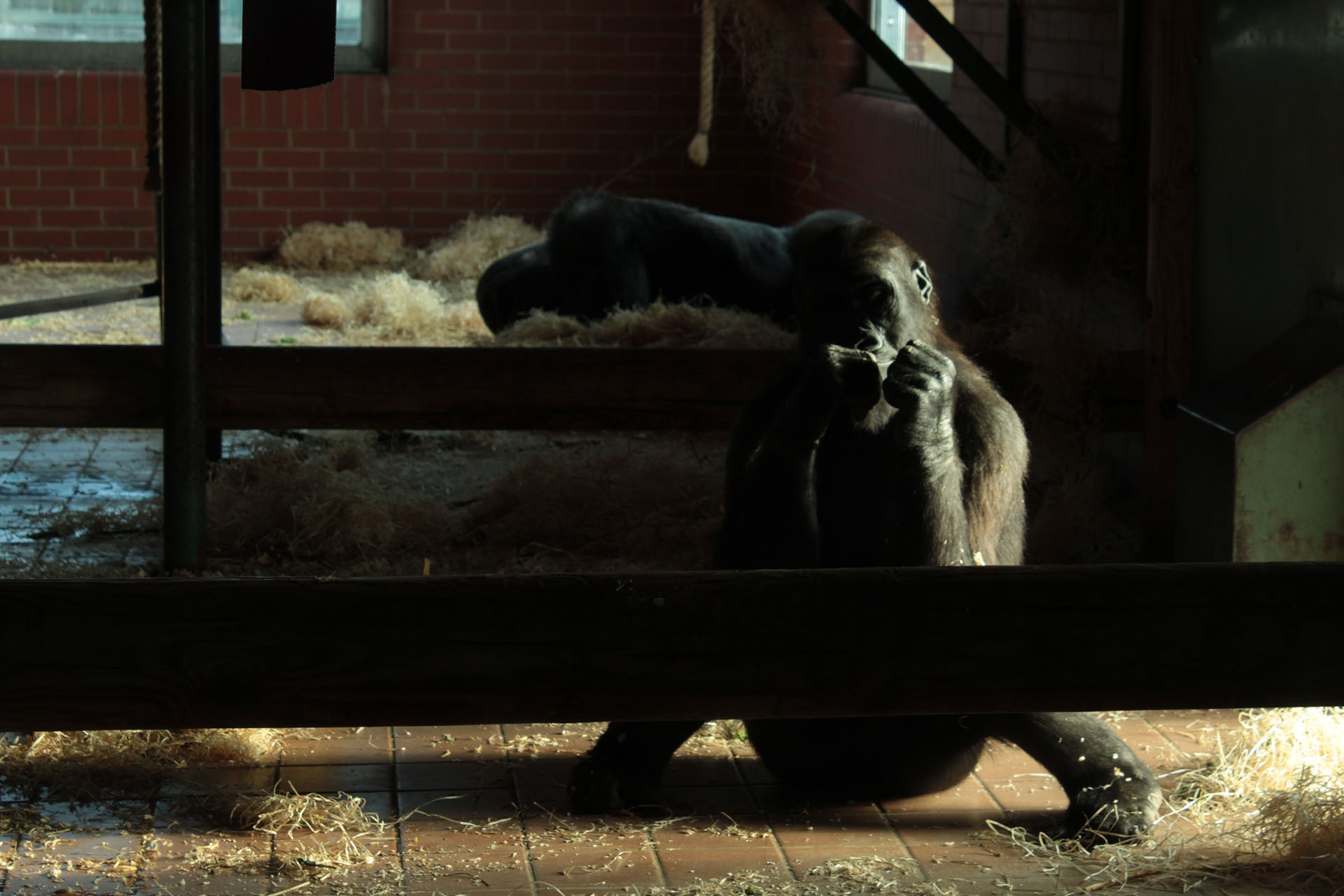 Silver fur on his back shows that he is a dominant male, a leader and protector. Despite his brutish appearance, he truly cares about his family and will do everything he can to protect them and keep the peace.

While this may mean a little tough love for his 2 sons Lope and Shufai every now and again, Oumbi is really a gentle soul most of the time and is happy to take his turn to play with them and teach them how to be a leader when they grow up.

Oumbi can be told apart from being the biggest of the 6 Western Lowland Gorillas (Gorilla gorilla gorilla) at Twycross zoo. His occasional chest-pounding is a warning to predators like leopards and rivals and announces his position.

A famous fact is that Twycross zoo is still the home to the chimpanzees from the famous PG tips adverts.

Our final stop of the day was to see Brad and Satanta who were hiding from the cold indoors.

Brad is a male and loves eating He also loves watching all the visitors coming to the enclosure. Spending up to 20 hours a day eating and usually only 2 and a half sleeping he uses the remaining hour and a half how he wants!

Satanta is a male and older than Brad. They can be told apart as he is slightly taller and darker in colour than Brad. Satanta loves eating and having the occasional playful tussle with Brad. The thick deposit of calcium on his forehead distinguishes him from the females of his species. 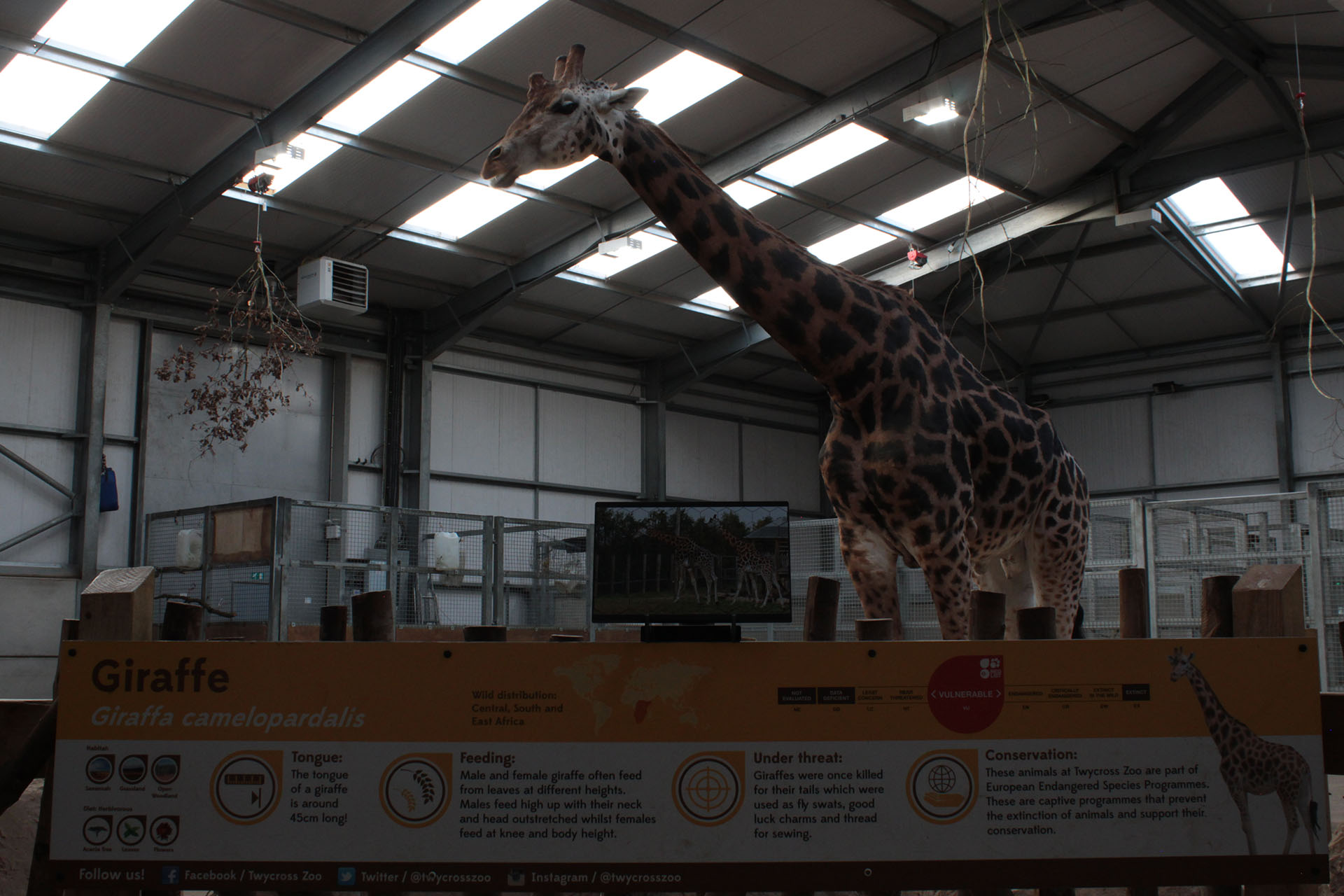 As we exited through the gift shop there is a selection of gifts and souvenirs including cuddly toys, stationary, books, food clothing and the HEXA-PLEX range.  We took some time with the friendly staff and had fun playing with one of the HEXA-PLEX puzzles. The video can be seen on our social channels.

Visiting Twycross is a must this year for any family and don’t forget to tag us into your posts when you visit as we would love to see your amazing day out.

By purchasing from the gift shop you are helping Twycross Zoo to support conservation projects all over the world.

This website uses cookies to improve your experience while you navigate through the website. Out of these cookies, the cookies that are categorized as necessary are stored on your browser as they are essential for the working of basic functionalities of the website. We also use third-party cookies that help us analyze and understand how you use this website. These cookies will be stored in your browser only with your consent. You also have the option to opt-out of these cookies. But opting out of some of these cookies may have an effect on your browsing experience.
Necessary Always Enabled
Necessary cookies are absolutely essential for the website to function properly. This category only includes cookies that ensures basic functionalities and security features of the website. These cookies do not store any personal information.
Non-necessary
Any cookies that may not be particularly necessary for the website to function and is used specifically to collect user personal data via analytics, ads, other embedded contents are termed as non-necessary cookies. It is mandatory to procure user consent prior to running these cookies on your website.
SAVE & ACCEPT